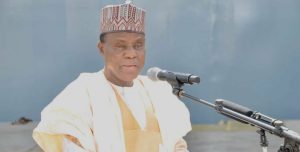 The Minister of Defence, Bashir Magashi, says Nigeria needs prayers from the United States government, not a terror alert that will ‘confuse’ Nigerians.

Mr Magashi said this on Tuesday while>responding to questions from members of the House of Representatives Committee on Defence during the budget hearing.

He stated that the terror alert issued by the US government was discussed at the security council meeting on Monday.

PREMIUM TIMES reported that the US and UK missions in Nigeria had on Sunday issued separate security alerts on possible terror attacks in Abuja.

The US Department of State in a further escalation of the threat approved the departure of some of its citizens willing to leave Nigeria due to the alert.

The US embassy also suspended consular services in Abuja.

Julius Berger , in a security advisory to its expatriates on Friday, asked them to avoid all public events within the FCT within a specified period.

However, the Nigerian government.through the Minister of Information, Lai Mohammed, condemned the advisories. The government insisted that Nigeria, including the capital Abuja, is safe.

‘We need prayers’ “I think what we need is prayers from the United States, not giving us information that will make our citizens to be either confused or not being able to take appropriate action,” Mr Magashi said.

He, however, acknowledged that there>is “no smoke without fire,” and that the.government is not ready to take chances.

The minister revealed that the intelligence agencies have provided information to guide the government on addressing the terror alert.

He stated that the main strategy is to ensure vigilance and proactive measures against any possible attack.

Mr Magashi disclosed that the Minister of Foreign Affairs, Geoffrey Onyeama, has been directed to interface with the.government of the US and others to ensure that such information in the future is given to the government directly, not citizens.

“Our minister of foreign affairs is taking.that up to ensure that information of such nature is brought to the notice of the ministry before disseminating to the society,” he said.

Earlier in his presentation, the.Chairman of the Committee, Babajimi Benson (APC, Lagos) said the military must take the terror alert very seriously.

“This Committee requests that the Armed Forces of Nigeria should take note of the recent security alert in Nigeria by the US government. We urge you to effectively collaborate with sister security agencies to ensure that all.security threats are completely neutralised and Nigerians can live peacefully,” he said.

Meanwhile, the House Committee on Army also directed the government to.ensure that everything is done to prevent terror attacks on the country.
The Chairman of the Committee, Abdulrasak Namdas (APC, Adamawa), directed the Nigerian Army to deploy adequate resources to protect the capital city.

Mr Namdas gave the directive on Tuesday when the Chief of Army Staff, Faruk Yahaya, appeared before the committee to defend the army’s budget.

“The army must put enough boots on the ground to contain any security breaches in Abuja in the magnitude claimed by the.aforementioned security alert,” he said.

Standing committees of the House are currently conducting public hearings on the 2023 budget proposal.