Nigerian artistes, Ric Hassani and Rudeboy are dishing out advice to the up and coming artistes

The ‘Thunder Fire You’ artiste, Ric took to the bluebird app to talk to newer artistes the likes of Ayra Starr, Ruger who are in a hurry to be known as #famous.

According to Ric, newer artistes shouldn’t be in a hurry to blow up. He asserts that these artistes need to gradually climb their way to the top. Ric noted that the fastest way to Success is the most destructive one.

Rudeboy who always drum support for other artistes reposted Ric’s tweet on his IG. He agreed with Ric about artistes being in a rush to be famous.

According to him, these artistes don’t know that if they rush to be famous, they will always turn out to be irrelevant in the future. 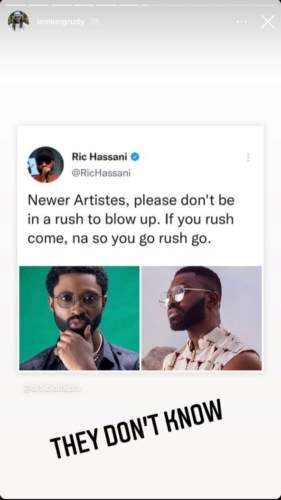