Nigerian Music executive, Don Jazzy has taken to Twitter to declare his signee, Ladipoe as the dopest rapper in Nigeria.

Don Jazzy who signed Ladipoe to his Mavin Record label in 2017 took to Twitter to promote his act’s newly released EP, “Providence”

The rapper made it clear that he took his time creating the project, one that his fans would cherish.

Don Baba J who is fond of promoting his artists’ project took to Twitter to do the same for Ladipoe, describing him as the dopest rapper in Nigeria.

“Listen to the Dopest rapper in the country in this EP. #Providence by @LadiPoe” 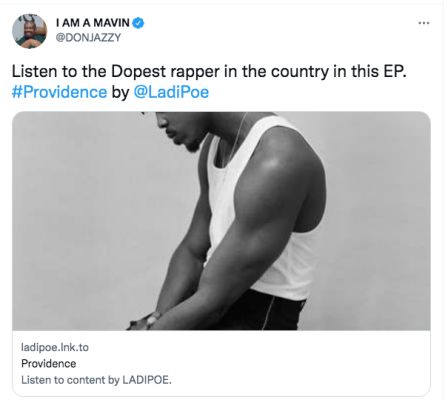