Nigerian Singer, Rema is setting the record straight following his rant where he called out DJ Neptune for releasing his song without his permission.

Recall that in the early hours of November 26, 2021, Nigerian star, Rema, took to his Twitter page to express displeasure at the release of a DJ Neptune record, which features him.

Around the same time, the star DJ and emPawa frontliner had released his sophomore studio album, Greatness 2.0. On it, a track titled ‘For You‘ features the MAVIN/Jonzing act.

According to Rema, the song titled “For You’ was added to the album without his permission and knowledge. Adding that he and Neptune haven’t spoken in a while.Read Here

Media personality, Do2dtun took to Twitter to chastise Rema over the calling out, telling that he needed to find a better approach on this kind of issue.

He also that when Rema and Neptune recorded the song, nobody was there and therefore he should have sent his grievances to Neptune’s representatives. 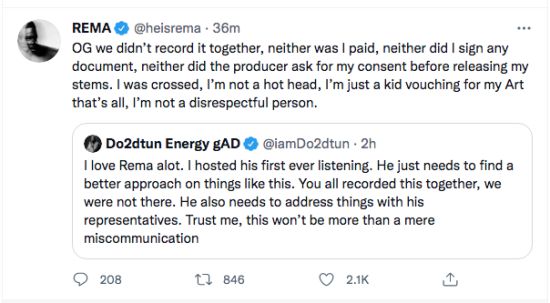