The ‘Champion’ crooner took to his Twitter page to state that the popular indigenous rapper’s alter ego is his inspiration forever.

The YBNL recording artist is still basking in the euphoria of being the most awarded artist at the 14th Headies Awards Show held on the 21st of February, 2021.

The 24-year-old was also the most nominated artist of the season.

Fireboy DML gained fame and prominence after his song, ‘Jealous’ which was an original track on the 2018 ‘YBNL Mafia Family’ all-star album became a hit. 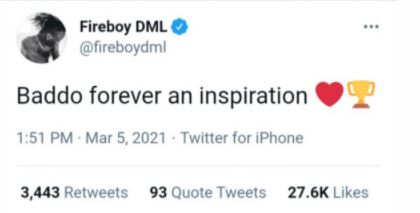