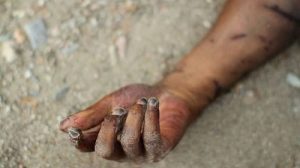 The Akwa Ibom State Police Command said it has arrested one Sunday Etukudo who reportedly killed his 20-year-old daughter Ofonmbuk Sunday over a misunderstanding in the family.

In a statement by the command Public Relations Officer, SP Odiko Macdon, made available to journalists in Uyo on Wednesday, the suspect claimed that the deceased daughter, during the scuffle, held his manhood which made him use a stick to hit her head and she collapsed.

The statement said the suspect, to cover his track, buried the daughter in his family compound at Omum Unyiam Village in Etim Ekpo Local Government Area of the state, disclosing that the police have already exhumed the corpse and preserved same for autopsy.

The statement reads in parts,

“based on credible information, on 9th October 2022, at about 1910hrs, one Ime Sunday Etukudo of Omum Unyiam village in Etim Ekpo Local Government Area, unlawfully killed and buried his daughter, one Ofonmbuk Ime Sunday, aged 20yrs, at the family compound at Omum Unyiam Village.

“The suspect alleged that there was a family misunderstanding, which led to a fight, and that the victim held his manhood, that he, in turn, used a stick to hit her on the head, which led to her death and that he decided to bury her in a shallow grave to cover his track.

The statement also said the police raided a kidnappers’ den and arrested a notorious robbery/kidnapper kingpin, Emediong Etuk, popularly known as Mopol, in the Ukanafun Local Government Area of the state.

The suspect, according to the statement, before giving up the ghost, confessed to being responsible for the many abductions and robberies, including the one of Ekom Ime Akpan on the 13/10/2022.

The statement also disclosed that

“on 29th September, 2022 at about 1400hrs, one Edet Uyo Ntung ‘m’ was arrested for the murder of one Emem Monday Uyo ‘m’, both of Afaha Ediene village in Ikono Local Government Area.

“Preliminary investigation revealed that there was a lingering family feud. The suspect, who is the uncle and family head of the deceased, invited him to his residence on the pretext of addressing the problem. Rather than doing so, he brought out his machete and cut his face, hand, neck and other parts of his body, leading to his instant death.”

Meanwhile, the Commissioner of Police, CP Olatoye Durosinmi, according to the statement, has ordered for a discrete investigation of the cases saying that suspects would be charged to court as soon as possible.

He, therefore, warned residents against self help and urged them to report a case of misunderstanding to police.