Former Abia State Commissioner of Finance, Mr. Obinna Oriaku and ex-commissioner for Works and Transport, Hon. George Nnanna Kalu have dumped the Peoples Democratic Party (PDP) for the All Progressives Congress, APC, in the State.

Speaking while being received into the APC fold by the Senate Chief Whip, Senator Orji Uzor Kalu, ex-finance commissioner Obinna Oriaku, noted that his joining the governing APC is not accidental but a well thought-out plan.

“today is another wonderful day. I am most grateful for having me under your roof and giving me the broom which symbolises sweeping and cleansing of what has been defined as the problems of our state and I am quite convinced that the only way to redeem our state is by joining APC. Not by accident, it was a well thought out process and I am convinced that with what we are seeing today, we will take Abia in 2023”.

On his part, George Nnanna Kalu, ex-Commissioner for Works, thanked the party leadership and the leader of APC caucus in the state, Senator Orji Kalu for welcoming him back to the progressive party.

He assured the leadership of his new party that he would work with other progressive minds in ensuring APC formed the next government in Abia State come 2023.

Welcoming the defected Chieftains of Peoples Democratic Party (PDP) the Senate Chief Whip, Senator Orji Kalu lauded the duo for the bold step, disclosing that he had been mandated by the National Caretaker Committee-led by Governor Mala Buni to woo progressive minded people into the APC fold to ensure the party won governorship seat in 2023 in Abia State. 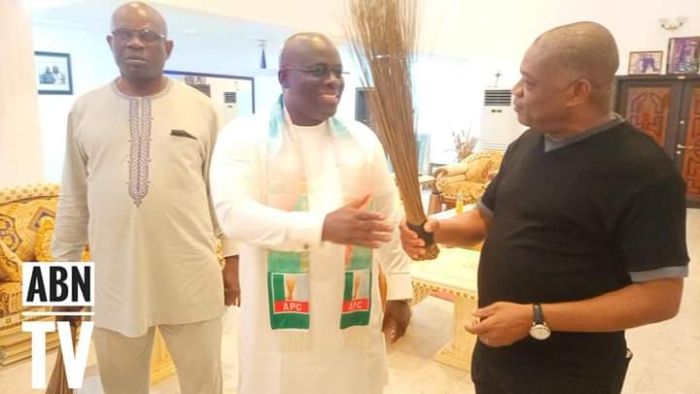 “I am also using this opportunity to warn and appeal to the state government, nobody who has chosen to be a member of the APC should be harassed. Nobody who has on his own chosen to belong to any political party should be tormented. We did not do that and we don’t expect anybody to do that. We will follow the law to pursue such cases and I dyont want to hear that property owned by APC members are revoked.

“I am sure Governor Okezie is educated and well civilized and would not do that and I call on his aides to be very careful too. Some of them worked with me and they know we play politics without bitterness and I expect them to respect the sanctity of democracy which is the freedom of association”.

In the same vein, a PDP Chieftain and current Commissioner for Information in Abia State, Chief John Okiyi Kalu, has said that the State will never be surrendered to those he described as “political hatchet men masquerading as opposition politicians in the state”.

Chief Okiyi stated this in Umuahia while responding exclusively to NAIJALOADED over the recent comments credited to a Chieftain of the All Progressives Congress (APC) in the state that his party, the APC, will take over the governorship of the state come 2023.

He dismissed the comment as “the empty boasts of a politically drowned element seeking relevance by any means handy, including the impossible”.

Chief Okiyi who assured that the state government was focused on delivering more dividends of democracy to the people, hence not interested in the politics of 2023 at the moment, called on politicians in the state to avoid overheating the polity but wait for the time of politicking before making provocative statements aimed at distracting the administration from delivering on its mandate.