Gov. Godwin Obaseki of Edo says his re-election bid under the platform of All Progressives Congress (APC) is narrowed because of the interest of the party’s National Chairman, Mr Adams Oshiomhole, in the state.

Obaseki expressed his fears on Wednesday at a news conference shortly after he was screened by the seven-member screening committee headed by Prof. Jonathan Ayuba at the party’s National Secretariat in Abuja.

The governor alleged that some of the questions asked by the committee showed that Oshiomhole had not distanced himself from the process of conducting governorship primaries in the state.

“Like I said, as a party man I have gone through the screening process but I do not believe that I will get justice because Comrade Adams Oshiomhole is an interested party in the Edo process.

“One of the questions that was asked was that why did I issue a gazette that will prevent the party from performing direct elections in Edo.

“That did I not see it as an anti-party activity? I just felt that if we put politics above the the lives of the people of Edo State, then we may be missing the point,” 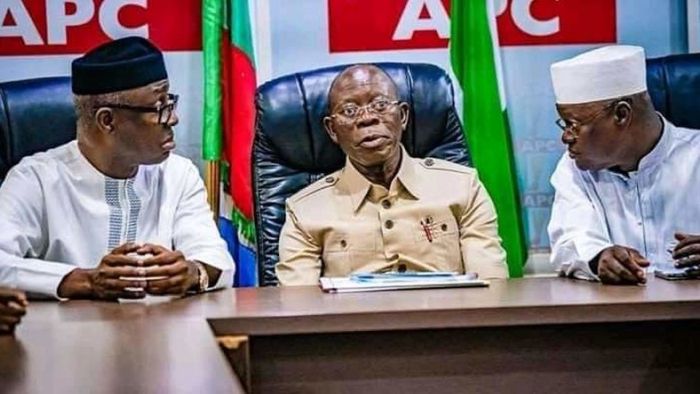 Obaseki recalled that when he came to the party’s National Secretariat to submit his nomination form, he told a news conference that Oshiomhole should distance himself from the process.

“The last time I came here, I asked that Oshiomhole should recluse himself from the process in the interest of peace and justice.

“But as a party man, I have had to go through the screening like everybody else.

“Since he is the judge and the jury in this matter, I will just wait for the outcome of the screening.

“I have given them all the information they need; the controversial certificate from the University of Ibadan has been tendered,”