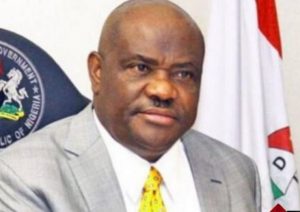 Rivers State Governor, Nyesom Wike has defended his appointment of 200,000 Special Assistants on Political Units, saying he did that to put food in the stomachs of the appointees.

Wike who responded to criticism from the opposition All Progressives Congress APC and other stakeholders in the state, said the appointments were to fulfill his promise that he would begin to implement his policy of “stomach infrastructure of putting money in the pockets of Rivers people.”

In a statement on Friday, Wike said there was no crime in using Rivers State money to put food on the tables of Rivers people.

“Before these appointments, my mail box almost crashed. People were sending text messages saying ‘why are you leaving us alone, the job is too much. This number cannot do the work’.

“Therefore, a lot of Rivers people are volunteering to be part of this work.

“It is me who is appointing. It is me who wears the shoe that knows where it pinches. It is not you outside because you are not part of the government.

“I know what it takes and I know these people will help me. Now that I am finishing, I want to finish very well.