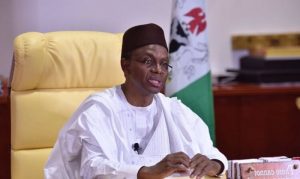 Governor Nasir El-Rufai of Kaduna State has expressed that banditry and insurgency still pose a major threat to the 2023 general elections and population census if not nipped in the bud.

He made this known on Friday when he received the state’s quarterly security report presented by the state Commissioner for Internal Security and Home Affairs, Samuel Aruwan on Friday.

According to the report, a total of 446 people were killed while 1,789 others were equally kidnapped by bandits across the state in the last six months.

The government also disclosed that 152 bandits were killed and 624 others arrested by troops in different parts of the state during the period under review.

El-Rufai noted that the establishment of the NorthWest Theater Command was to counter insurgency across the affected states and enhance the coordination of the resources of the armed forces, the police, the State Security Service (SSS), the respective state vigilance services, hunters, and other local volunteers to fight the insurgents.

He expressed delight at the success of the security operation launched in 2015-2016 as collaboration between the states in the area and the Federal Government.

El-Rufai pointed out that the initial success of the operation recorded in the KamukuKuyambana forest ranges was not consolidated through continuous operations which enabled the criminal elements to recover, regroup and resume their activities.

The governor stated that the lesson and the nature of the cross-state operations of the criminals informed the view of the Kaduna State government that a theatre command similar to the one in the North-East was required.

He added that effective security operations in the seven states of the North-West and Niger State, which have continuous and contiguous forest ranges, required this approach.

“We have invested considerable resources and energy in managing security to the extent that the constitution permits. Our interventions since 2015 have included supporting the federal security agencies deployed in our state with vehicles and other logistics, collaborating with other frontline states to fund military operations in the 2015–2016 period, and investments in security infrastructure and technology.

“The lessons learned in the 2016-2019 period informed our decision to establish the first sub-national Ministry of Internal Security and Home Affairs at the beginning of our second term in 2019,” the governor said.

He said the concerns about political thuggery as the country approaches the elections must be addressed in a proactive manner, adding that the government needed to profile political actors, map their thugs and bring them to justice immediately.

He pointed out that those engaged in propagating falsehood and incitement need to be prosecuted, he added that the case of the Birnin Gwari lynching and the statement that followed need to be met with prosecution and conviction. On the state’s security reports for the second and third quarters of 2022, Malam El-Rufai said figures showed a pattern of reduction in the gravity of security incidents in the second and third quarters, compared to the first quarter.

“This is a consequence of the intensification of offensive security operations against the bandits in recent months. We have, for years, called for a comprehensive and sustained assertion of the prerogatives of the state through combined air and ground military and police operations. “This is the most effective way to protect our people, uphold law and order and enhance the ability of our people to peacefully pursue their livelihoods,” he said.

The governor urged community leaders and traditional rulers in the state to intensify efforts at identifying informants, black spots for the sale of drugs and those that destroy critical infrastructure.