You guys should stop talking about the stupid assumption bla bla

What if he has paid him for the song?

Did Poco Lee ever mentioned that he won’t give him share from the streaming money?

Is 3k dollars enough to get to that stage of featuring Olamide and being on the same stage with Wizkid?

Guys you see those three mumu questions above, I’m tired of them

Of what percentage would Poco Lee give Portable from the music streaming? Somebody that did 80/20 rate in just spraying money ooo. It’s clear that if the song could generate N10m Portable will get N500k.

Why will Poco Lee takeover the song in the first place??

You want to help artiste to be a better person and you never open profile for him on any music platform.

His hit song is ‘Zazu Zeh’ and Poco Lee has claimed it already, which means the dude have to find another hit song in other to remain relevant, the top members have claimed this already.

This is daylight robbery and one won’t know until the guy voice out.

I can tell you guys for free that he’s been forced to apologize publicly, that wasn’t is will, with his expression he’s not ready to do that.

Poco Lee who is not a Music Artiste claim full ownership of a ready-known slang in the name helping. Apple Music, Audiomack, Boomplay, Spotify and even many music blog sites such as Naijaloaded, Tooexclusive, 360nobs recognized Poco Lee as the owner of the song.

So what will be of the guy benefit after this trend is off? Even the music video they’re shooting will be uploaded on Poco Lee YouTube page.

That’s too much and it’s no more helping but ripping off someone’s effort. Poco Lee is using advantage of Portable’s ignorance. 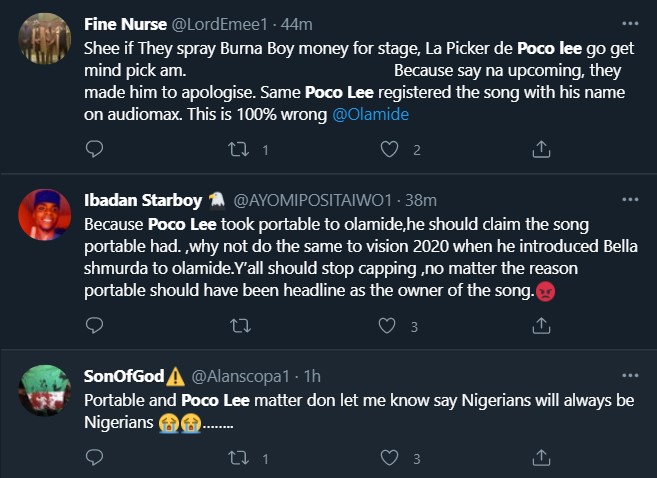