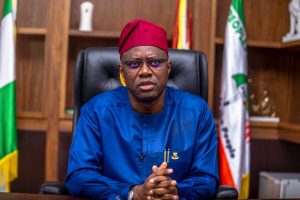 Some leaders and stakeholders of the ruling Peoples Democratic Party PDP in Oyo State have declared that the State governor, Engineer Seyi Makinde is on his own.

The PDP leaders made this disclosure while speaking on Friday in Ibadan, the State capital.

NAIJALOADED recalls that Makinde and some PDP governors, among whom are Governor Nyson Wike have said that they will not support the presidential candidate of the PDP, Alhaji Abubakar Atiku.

Some PDP leaders and prominent stakeholders of PDP in the State have, however, disowned the governor.

The PDP leaders were led by a former minister of Mines and Steel Development, Elder Wole Oyelese and Engineer Femi Babalola.

The duo of Oyelese and Babalola, while speaking at an emergency meeting of the leaders of the party from the 33 local government areas of the State, insisted that Makinde was only speaking for himself and not on behalf of the whole party.

Oyelese said that PDP leaders in the State would deliver the State for Atiku in 2023.

“A good politician would not speak like that. For Makinde to say he would not work for Atiku doesn’t mean anything.

“He is on his own. It is an empty threat. If he said we should not vote for Atiku, who are we voting for?”

Babalola, in his own contribution, alleged that Makinde is also guilty of the points he raised against Atiku.

“He that comes to equity must come with clean hands. As an Engineer, I analyse issues.