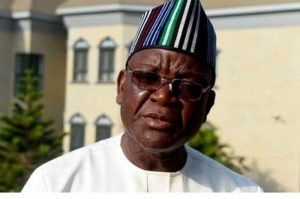 Samuel Ortom, governor of Benue, has commended the lawmakers who issued a six-week ultimatum to President Muhammadu Buhari to improve the nation’s security or risk impeachment.

Recall that on Wednesday, Peoples Democratic Party (PDP) legislators in the senate issued an ultimatum to Buhari to address insecurity in the country — or face impeachment proceedings.

On Thursday, PDP members in the house of representatives followed the path of their senate counterparts.

On Friday, Ortom received a delegation of some members of the national assembly led by Philip Aduda, senate minority leader, in Abuja.

According to a statement by Nathaniel Ikyur, his spokesman, Ortom said Buhari has performed below the expectations of Nigerians in terms of addressing security and economic challenges.

“The governor described the decision of both the senate and the house of representatives to impeach the President as ‘patriotic’ and particularly commended some members of the ruling All Progressives Congress, APC, who have opted to do the ‘right thing’,” the statement reads.

“According to Governor Ortom, President Buhari has performed far below the expectations of Nigerians in solving both the security and economic challenges of the country, and so needs to give way for a more competent person.”