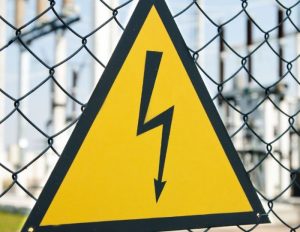 A middle aged man whose name has not been revealed has been electrocuted while allegedly destroying a campaign billboard of one of the gubernatorial candidates in Oyo State.

The man died as a result of the electric shock when he allegedly destroyed the campaign billboard erected in Ibadan.

NAIJALOADED recalls that there are reports of destruction of campaign billboards of candidates of various political parties across the State as the 2023 general elections draw nearer.

Some of the campaign billboards that have been vandalised, destroyed or totally removed in recent times are those of the Peoples Democratic Party PDP All Progressives Congress APC Accord Party (AP) New Nigeria Peoples Party (NNPP) and Social Democratic Party (SDP).

NAIJALOADED, however, gathered that the man whose identity has not been revealed, was destroying a campaign billboard of Mr. Adebayo Adelabu, the gubernatorial candidate of Accord in the 2023 elections when he was electrocuted.

The man got electrocuted when he touched the electric wire beside the billboard at the Challenge area of Ibadan on Friday.

An eyewitness, who begged not to be named, noted that the residents of the area had already warned the man against destruction of the campaign billboard.

“We had cautioned him against destroying peoples’ properties around.

“Suddenly, we saw him shaking, and no one could move closer to him as it is obvious that he had mistakenly touched the electric wire beside the billboard”.

Tunji explained that there have been different reports of destruction of campaign billboards in the State. He added that Adelabu expressed deep regret about the incident.

“We heard of the unfortunate incident. There have been different reports on what the guy was doing. Some said he was fixing the billboard while others said he was vandalising it. Whichever it is, no one wishes for the death of anyone, not any citizen of Oyo State. Even if he was vandalising the board, we would rather engage him positively rather than wish him that fate.

“Oloye Bayo Adelabu expresses deep regret about the incident and prays for the peaceful repose of the soul of the deceased. May the Almighty Allah accept him in Aljanah firdaus. His heartfelt condolences go to the family of the unfortunate individual”.