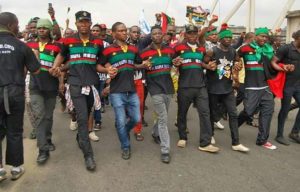 The Indigenous People of Biafra, IPOB, on Wednesday warned people of the South-East against selling their land to government and Fulani agents for alleged agricultural purposes.

IPOB said Fulanis buy the lands under the guise of agriculture but invite terrorists to invade the South-East.

Emma Powerful, the spokesman of IPOB, warned that whoever is caught in the act would forfeit the land forever.

A statement by Powerful reads partly:

“The global movement and noble family of the Indigenous People of Biafra (IPOB) ably led by Mazi Nnamdi Kanu who is illegally detained in the DSS custody and solitary confinement in Abuja wish to remind Biafrans, friends of Biafra, Lovers of Biafra freedom, all the Traditional Rulers and President-General in Biafraland to desist from any plan or pressure to either sell or hand over our ancestral lands to any government or Fulani agents for any purported agricultural purposes or anything else.

“This warning has become very necessary and is mainly for all Igbo Traditional Rulers, Politicians, Real Estate Agencies and other political jobbers in Biafraland to desist from any attempt to secretly allocate community lands to Fulani herdsmen in the name of Agricultural investment or any project.

“The marauding Fulanis are not coming for any agricultural business rather to occupy the land with their cattles and subsequently invite their terrorist relatives from Sahel to occupy our ancestral lands in their land grabbing agenda.

“Anyone after these warnings that goes ahead to sell lands to these invaders, and we get wind of it, should bear it in mind that we cannot allow Fulanis or their agents to operate on such land. The owner of the sold land will forfeit that land forever.

“If you have any ongoing negotiations on land sale to Fulanis or their cronies, we advise you to cease forthwith with such arrangements. We cannot hand over our ancestral lands to Fulani invaders whose agenda is land grabbing in disguise and violent takeover in future.”